“PIAZZETTA” AND CENTRAL SPACES OF TAIO

REDEVELOPMENT OF “PIAZZETTA” AND CENTRAL SPACES OF TAIO

The project intends to create a link between the urban spaces surrounding the future municipal seat, through the interpenetration of the two areas and their respective elevations: thus an urban hinge is created whose fulcrum is the new entrance to the town hall building, moved to the south in the new entrance element that directly overlooks the new square and at the same time constitutes the extension of piazza San Vittore thanks to the large terrace above. The geometric shape that derives from the intersection of the existing urban axes allows the construction of two square elements in whose intersection the new municipal entrance is located; the level of the new square is accessed through a setback of the new front of the building built in adherence to the ground floor. Upstairs, a large carving in the pavement allows you to illuminate the void below; along the entire perimeter of the upper square, a continuous metal strip (burnished iron) allows a unitary reading of the paths and defines the accesses along all the fronts of the institutional center. Vertical greenery contributes significantly to building the limits of urban spaces: as is currently the case near the two churches in the town, large trees are placed on the edge of the new urban tiles, ensuring the visual continuity of greenery as an important perceptive element of perspectives and visuals. 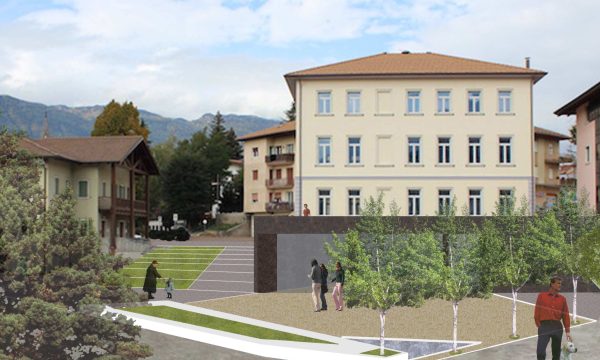